Reading time: 6 minutesSeparated by only a couple of weeks, two software conferences took place in Bucharest at the end of spring 2014: ITAKE Unconference at its 2nd edition and DevTalks at its first. Both conferences pretended to focus on software development and both were oriented toward people writing software on day to day basis.

I had the pleasure of speaking at both conferences, and though my speeches were very different, I can compare the two events from the point of view of a speaker.

The focus of ITAKE is interaction. It is organised so that attendees and speakers have many opportunities and the proper ambient to interact. One of the ways the conference encourages this is by having two of the four threads dedicated to hands-on workshops where the attendees, under the guidance of a speaker / trainer, have the opportunity to learn new things by actually doing them. These workshops  usually encourage collaboration on several levels:
Another key attraction of ITAKE is its set of Open Space sessions. It is a different way to get speakers and attendees to discuss various topics. This, not only helps the speaker-attendee relations, but also encourages attendees to discuss interesting topics between themselves. These sessions are like the coffee breaks of other conferences, but in a more organized way. This year, half of each day of the conference was dedicated to Open Space, and there were 5+ topics discussed in parallel all the time. Because topics are suggested both by attendees and speakers or organizers, the variety of topics is amazing. There can be totally different things discussed just 3-4 meters away from talk you are part of.

One of the great things I’ve learned and I absolutely appreciate, are the principles of Open Space.
These also lead to the rule of two feet:

If at any time during our time together you find yourself in any situation where you are neither learning nor contributing, use your two feet, go someplace else.

In my opinion the rule of two feet should apply to any conference and to any kind of talk, workshop, or speech. If, after 20 minutes, someone realizes he or she is not interested in my speech, I would prefer him to leave and go somewhere where he can learn something new. I hate to bore people, I hate to see people heads falling aside, I hate to see people with a look on their faces clearly telling me they have no idea what I am speaking about.

And ITAKE encourages this type of behaviour. You want to jump in a workshop one hour after it started? You are most welcome. Or if after half an hour you realize you can learn little or nothing from the workshop you’ve chosen, you are free to go someplace else where your time is not wasted.

And the third way to encourage collaboration between the people present at the conference are the “Code with a stranger” and “Code and bear” sessions held usually in the evening. These are informal, without a specific topic, just plain simple occasions for strangers to meet, to code, and to share ideas. And yes, they usually go on into late night, so having more than four hours of sleep per night when at ITAKE is almost impossible. Which leads me to my next idea, the disappointing “party”. Well, it was a sponsored event, with free bear, intended to be a kind of social event … but nobody was sure what should happen, so we just drank bear and talked until it ran out or we got bored and went to code with a stranger … or not so stranger. But! Considering that last year there was no party at all, this is a step in the right direction.

ITAKE also selects topics that are usually product, framework, tool, and even programming language agnostic. Of course there are a few interesting tools presented, but usually these are mentioned in the context of a wider topic and only in order to exemplify how, for example, one can do TDD in a specific programming language.

All these conference ideas lead to speakers who want and like to interact with attendees and to attendees who are not afraid to open their mouth to speak what’s on their mind. Of course, attendees by definition are less open to speaking, they don’t like to stand up and speak in front of many other people, otherwise they would be the speakers. But there is this small percentage of people who are curious enough to come to conferences and brave enough to interact with other. These people are the target of ITAKE, and this is probably why the conference could barely gather 250 attendees. You know, most programmers are extremely introverts, and they would sourly have a difficult time to find a place for themselves at ITAKE. 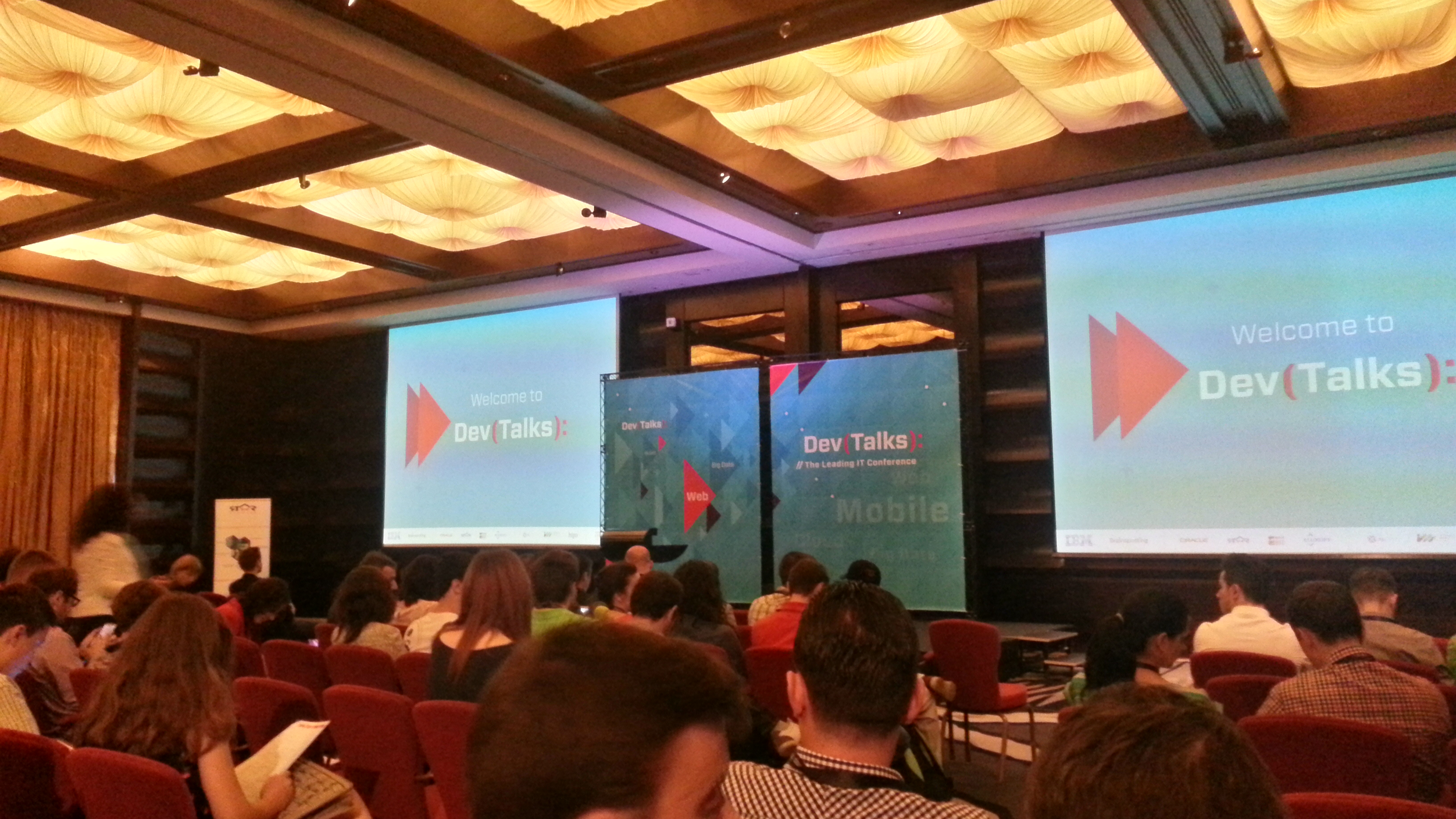 DevTalks is a totally different type of beast. It is oriented on presentation style speeches and encourages companies to come and present. It also prefers volume over quality when it’s about attendees. There were 400+ attendees at DevTalks, almost double of ITAKE. And while I was impressed by this at the beginning of the day, I was disappointed at the end of it.

The attendees at DevTalks are people fitting the majority of the timid, bored, programmers I described above. If you are an introvert, you will love DevTalks. There were no rules about leaving and jumping between talks at the conference, but I saw that attendees were also less interested and much more afraid to leave. I personally “butterflyied” from one talk to another. There were four parallel threads, so there were enough ideas told simultaneously to find one I like. And when there were none, the lobby was always open to chat with others similarly bored by the talks.

But while me and a few other had no problem leaving a formal speech and starting a talk with a few others in the lobby, the majority of the attendees did not do so. Some of them actually told me they were ashamed they went to a talk and later realized  it is boring and they though they will be ill perceived if they leave the talk before its over.

So, one of my recommendation to the organizers of DevTalks is to encourage attendee migration between the talks. Encourage people to stand up and walk out and find a better place to stay.

Also being at its first edition in Romania, DevTalks made some honest mistakes I feel the need to highlight in order to make the organizer aware of them:

But there were good things also that need to be mentioned:

As a final thought, I think DevTalks was a decent event, and considering it was organized for the first time, it can even be considered a small success. I expect to see a better panel with more famous speakers next year, a better separation between product and programming and more chances to speak with attendees in an organized atmosphere.

To the organizers of both conferences…

I am happy I could speak at your extraordinary events. I liked each of it in its own way. They were after all events for programmers, even though their audiences were different. Thank you for inviting me and I hope I will speak next year again at your events.